In Lake County, Florida, a man crashed his truck into an SUV in a busy intersection in his neighborhood—apparently on purpose. “People are always running the stop sign at this intersection and since you guys (law enforcement) don’t do anything about it, I did,” Homer told Lake County sheriff’s deputies after his Sunday smashup, according to Orlando station WFTV. No one was hurt in the accident. The man was charged with two counts of aggravated battery with a deadly weapon and one count of reckless driving.

In California, a woman attending a performance of California’s North State Symphony orchestra dozed off during a performance of “The Firebird” by Igor Stravinsky. However, the crash of drum woke her up and she let out a loud scream. The Huffington Post reports that most of the audience laughed, and even the orchestra director smiled and snuck a quick look over his shoulder as he conducted the orchestra.

In Seattle, Washington, a family found a snake in their toilet. While this is not unheard of, the snake they found was not just any snake. KOMO-TV reports the family called police after a child found the 4-foot ball python in the toilet.

In Toronto, Canada, a woman has real issues with Santa Claus. The Huffington Post reports that a cell phone video posted online shows the woman yelling at a mall Santa. She asked, “Do you have a sleigh?” and also proceeded to say, “You’re not magic; you’re not even real! I heard about it when I was a young kid!” Santa avoided engaging with the woman. A mall spokeswoman confirmed to HuffPost that mall security guards spoke to the woman, who then left without incident.
In Sudbury, Massachusetts, police stopped a car with an enormous Christmas tree on the roof. Let’s just say, if the tree covers the whole car, it’s not safe to transport. 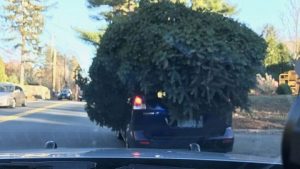 It’s not just cats that like riding on Roombas.

If you can't view the below video, try https://youtu.be/rRsstfoKQeo.
If you have an Alexa or Google Home, be careful who, or what, is listening to your commands.

If you can't view the below video, try https://youtu.be/JeQD4UdGY-A.
There’s only one good girl in this house!

If you can't view the below video, try https://youtu.be/drpAnI6WKEM.