In Wolverhampton, England, a not so bright YouTuber’s friends ended up calling police when their video stunt went terribly wrong. According to the BBC, a man had his friends cement his head, which was protected by a plastic bag, inside a microwave. The mixture set quickly and the man’s friends tried for an hour and a half to free him. They did manage to get a tube into his mouth to help him breathe. After calling firefighters, it took the rescuers about an hour to get him free.

In Milwaukee, Wisconsin, when officers tried to pull over a man in a minivan, he fled, starting a chase that reached 100 mph. The chase ended when the driver crashed his minivan down an embankment. According to the Associated Press, the driver told officers he crashed his vehicle because he was checking his cell phone.

In Edmond, Oklahoma, parents were confounded about why their baby’s pacifiers kept going missing. Then, one of the baby’s grandmothers saw the family’s dog take one off a counter. The Associated Press reports that a trip to the veterinarian and resulting surgery revealed the dog had 21 pacifiers lodged in her stomach.

In Plymouth, England, a 38-year-old man takes pride in the fact that his Christmas tree lights are a decade older than he is. The man says his mom bought the lights back in 1969 for 3 pounds―the equivalent of around $58 in 2017. Although the lights came with a spare set of bulbs, the man says he’s never needed to replace them, according to the British news agency South West News Service.
A very impressive Christmas lights show.

If you can't view the below video, try https://youtu.be/9A62DjCZG04.
This little girl has a simple request from Santa Claus for Christmas.

If you can't view the below video, try https://youtu.be/_8XarBbb5O8.

In Berlin, Germany, a pilot was doing a test flight with an Airbus A380, when he, engineers on the flight and air traffic control decided to trace a Christmas tree pattern with the plane. According to the Associated Press, the plane turned several corners and loops during its flight to produce a pattern in the shape of a tree complete with baubles. 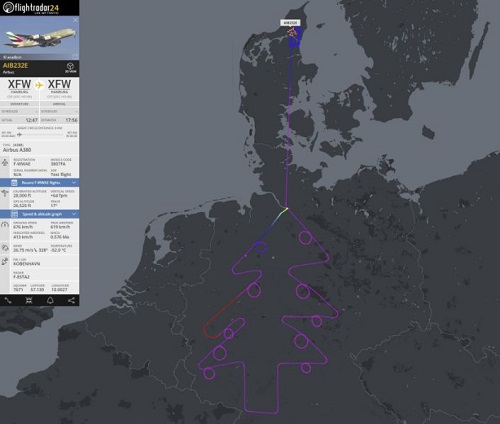