Institutional investors generally don’t mine coal, make cement or indiscriminately strip large forests. But the companies in which they invest might be engaged in such activities that experts say will prove incompatible with the shift to a lower-carbon world. And, they add, a retirement plan’s holdings of these at-risk investments could have negative consequences for plan participants.

Climate change risks can affect plans in several ways, says Therese Feng, vice president of research for The Climate Service, a climate risk analysis firm in Durham, North Carolina. Physical climate risks such as droughts, fires and rising sea levels can result in both market and credit losses in a portfolio. For example, imagine that drought conditions continue to worsen in California, which accounts for almost 15% of the U.S. economy. At some point, the lack of water and resulting rationing conceivably could constrict the state’s businesses, particularly agriculture, and reduce employment levels. The resulting slowdown to such an important component of the U.S. economy could then affect national business conditions and stock market values.

Investors also face climate transition risk, she adds. Transition risk is the potential financial impact of the economic transition to lower greenhouse gas emissions, which includes a shift to using lower-carbon energy sources and increased use of lower-emission technologies. To date, investors have focused more on transition risk than on physical risk due to access to data and methodology, says Feng. “But institutional investors need to be knowledgeable of how both physical and transition risks can affect their strategies, both in the near- and medium-term,” she cautions. 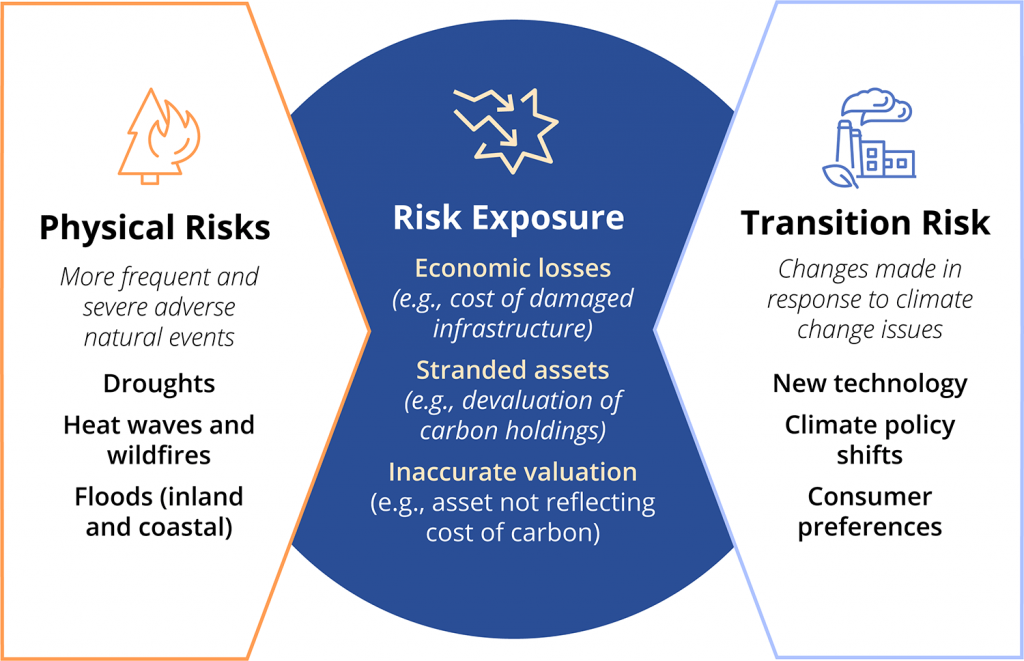 Source: GAO analysis of reports from Merce and TCFD.: GAO-21-327

“It wouldn’t surprise me at all if other regulators from around the world who had a similar agenda looked at [the UK’s Act] and thought, ‘Well, let’s do something similar,’” says Gillett. “‘Let’s put in similar instruments, in whatever context, to accelerate action.’”

On an agency level, in June, the Government Accountability Office (GAO) issued a report criticizing the Federal Retirement Thrift Investment Board (FRTIB), which oversees the $735 billion Thrift Savings Program (TSP) for federal employees, for not taking “steps to assess the risks to TSP’s investments from climate change as part of its process for evaluating investment options.”

Sources note that it’s still unclear how climate-benchmarking risk concerns will influence companies’ DC plans. Sponsors control plan lineups and could increase the presence of environmental, social and governance (ESG) funds, but participants still choose their own investments. DC plans, and the way they’re set up with a menu of options, present a slightly different challenge than DB plans, in which the sponsor can take a holistic portfolio view, says Gillett. It’s perhaps harder to assess risk looking at an individual investment offering or option, because each investment might have different roles in that menu’s structure of options, he adds.

The UK’s regulations and the GAO’s report both reference the Task Force on Climate-Related Financial Disclosures (TCFD)’s recommendations. TCFD’s supporters believe the recommendations will benefit investors, particularly those with a longer-term focus like plan sponsors, by providing “clear, comparable and consistent information about the risks and opportunities presented by climate change.” Per the report: “Compounding the effect on longer-term returns is the risk that present valuations do not adequately factor in climate-related risks because of insufficient information. As such, long-term investors need adequate information on how organizations are preparing for a lower-carbon economy.”

The TCFD recommendations form a voluntary framework for climate-related disclosures, covering governance, strategy, risk management, and metrics and targets, explains Joost Slabbekoorn, senior responsible investment and governance specialist at APG Asset Management in the Randstad, Netherlands. “The TCFD can be used by corporates as well as asset managers and asset owners. Right now, the TCFD is a voluntary framework but elements of it have already surfaced in regulation, for example, in the EU Sustainable Finance Disclosure Regulation [SFDR],” Slabbekoorn says.

The GAO and TCFD also both cite the need for organizations to conduct scenario analysis, which is an analytic technique for projecting the possible impact of climate-related change.

“Scenario analysis is trying to ask, in the future world, when we do respond to climate [change] and we have the policies in place that respond to it, what does that actually do to your business?” says Laura Zizzo, co-founder and CEO of climate-risk consulting firm Manifest Climate in Toronto. “For instance, if we can no longer run internal combustion engines, what does that actually do for my business?”

Sarah Bratton Hughes, head of sustainability, North America at Schroders in Brooklyn, New York, says Schroders has built its own toolkit for scenario analysis, but she warns there is “no silver bullet” or perfect scenario analysis.

“We’re focused on assessing [companies’] physical risk, their transition risk in our carbon value-at-risk model, which is essentially stress-testing portfolios for carbon pricing, and we’re focused on understanding stranded asset risk—how exposed they are to what we would consider climate growth around a technological perspective,” she explains. “And the next area that we’re really focused on is climate alignment: How aligned is this company’s future trajectory with a one-and-a-half-degree world, which is essentially the same thing as being net-zero?”

Investors can choose from a range of benchmarks to track their investment results and operational performance. Benchmarking a portfolio’s investments for climate change risk is more of a challenge, however.

Zizzo says she believes the problem arises because traditional financial benchmarks are not risk-adjusted for climate change. “I think we have to think about that and figure out how we risk-adjust our financial benchmarks for climate change, because we are seeing contraction of GDP [gross domestic product] based on physical risk alone that is not factored into the benchmarks,” she says.

Current fund benchmarking focuses on assessing fund impacts on the environment, Feng explains. “The converse––benchmarking for the climate risk of investments––is nascent, as risk methodologies to estimate climate impacts continue to evolve to represent both physical and transition risk, and physical asset data become more reliable,” she says.

Feng reports that The Climate Service has recently calculated the climate-related financial risk for the S&P 500 within its Climanomics platform, allowing users to benchmark and compare global industry classification sectors. “By year-end, we will have climate financial impacts for major U.S. corporate bonds and global listed equities, followed in 2022 by coverage of sovereign and municipal bonds,” she adds.

Is It a Fiduciary Duty?

Even if an institutional investor agrees that including climate-change risk analysis in its investment management makes sense, does its inclusion rise to the level of fiduciary duty?

Thomas Tayler, a senior manager in London-headquartered insurer Aviva Investor’s Sustainable Finance Centre for Excellence, says he believes it does. Fiduciary duties require investors to act in the best interests of their beneficiaries and to take all material factors into account when making decisions, he explains. Climate risks are financially material risks to the investments that sponsors or their delegated asset managers make on behalf of their beneficiaries and therefore should be taken into account alongside any other risk with the potential to have a material impact.

“The longer term the investment horizon, the more likely it is that climate will not only be a material risk, but the most material risk,” Tayler maintains.

Feng expresses a similar sentiment. In the absence of a legal redefinition under the Employee Retirement Income Security Act (ERISA) by the Department of Labor (DOL) of fiduciary duty to include ESG factors, at the most fundamental level, sponsors need to assess if climate change has an impact on fund solvency and the ability to pay benefits, Feng says. She believes that in the same way a corporation’s failure to disclose risk or mitigation means it is difficult to assess the impact on share price, a fund’s lack of understanding and disclosure of climate risk make it difficult to assess the impact on portfolio performance and for plan participants to be fully informed.

The sources interviewed all agree that market and regulatory forces are aligning in support for greater inclusion of climate-change analysis in retirement plan management. And, given the Organisation for Economic Co-operation and Development (OECD)’s estimate that pension funds held more than $35 trillion of assets worldwide at year-end 2020, the result could be a profound impact on global capital flows.