The end of 2017 and the first few weeks of 2018 brought a renewal in the longstanding debate surrounding the merits of environmental, social and governance (ESG) investing programs enacted by public and private pension plans.

Case in point is the series of sharply written, dueling reports in which experts from the American Council for Capital Formation (ACCF) and CalPERS debate the proper role of environmentally and socially conscious investments—and whether the massive California public pension fund has grown too political in its actions.

On the East Coast the debate has fired up as well, prompted by New York City Mayor Bill de Blasio, Comptroller Scott Stringer and other trustees of the city’s $189 billion pension funds. The city’s political leadership recently announced a goal to fully divest city funds from fossil fuel reserve owners within five years, which they say would make New York City’s the first major U.S. pension plan to do so. Practically speaking, the mayor and comptroller pledged to “submit a joint resolution to pension fund trustees to begin analyzing ways to divest from fossil fuel owners in a responsible way that is fully consistent with fiduciary obligations.”

In total, the city’s five pension funds hold roughly $5 billion in the securities of over 190 fossil fuel companies, according to data provided by the city. Given those numbers, the city’s move, the mayor and comptroller claim, is among the most significant divestment efforts in the world to date. Several New York City pension fund trustees declined to return requests for further comment, but there is some additional insight into the city’s thinking published in media reports and on government websites. Stringer, for example, is quoted variously as saying this effort is admittedly fraught, complex and that it will take time—but he feels it is fully legal and in keeping with the fiduciary duties of prudence and loyalty owed to public pensioners.

“There are going to be many steps,” he has told reporters. “But we’re breaking new ground, and we are committed to forging a path forward while remaining laser-focused on our role as fiduciaries to the systems and beneficiaries we serve.”

Just as with the CalPERS challenge, the New York pledge to move down the road of ESG has already resulted in significant criticism and pushback from lobbying and advocacy groups sympathetic to the concerns of large asset owners and other stakeholders. ACCF, in fact, has published another report suggesting, as it did with CalPERS, that New York City’s push to divest its investments in fossil fuels “are a recurring example of the city comptroller advancing social causes over financial results.”

The ACCF report seeks to paint the divestment as “just one example of politics taking precedence over returns for New York City beneficiaries.”

“Fund managers responsible for the pension-fund system of New York City routinely invest in things that have no reasonable expectation to yield acceptable returns for investors,” argues Tim Doyle, ACCF’s executive vice president and general counsel, and author of the report. “We concur with previous reports on the role that poor management has played in growing the unfunded gap, as well as how the use of certain accounting tactics has allowed fund managers and the comptroller to shield from public view the true consequences of their mismanagement.”

According to ACCF, “four out of every five taxpayer-dollars collected by New York City’s personal income tax are spent paying down the city’s public pension fund system’s liabilities, a 567% increase over the past 15 years. The city’s budget will soon allocate more spending on pension costs than on social services (excluding education).”

Public data shows the New York City pension funds’ liability ratio is self-reported at $56 billion. But Doyle says this figure is inaccurate: “Other analyses based on more realistic projections of future returns point to an actual funding gap more than double the official figure.”

As with the CalPERS matter, readers of the ACCF report will have to dig into the reporting and draw their own conclusions—but it is worth pointing out that the ACCF’s arguments, while articulate and important, do not necessarily do full justice to ESG as a broad topic. Indeed, proponents of environmental, social and governance investing say opponents of the philosophy have unfairly worked to define it as a foolishly motivated privation—as the sacrifice of lucrative energy and oil company stocks because of irrelevant moral discomfort. A rational ethical scheme, perhaps, but not an approach that is financially sound for the spending of taxpayer dollars.

For a while the criticism made much more sense in the fiduciary institutional investing world. The earliest generations of ESG portfolios took the form of standard equity indexes with energy and other higher-waste sectors and stocks cut out. It’s a practice known as “negative stock screening,” and today much of the opposition to ESG is still caught up in this initial association with stock screening. This is despite the fact that the Department of Labor has modernized its stance and no longer requires that ESG factors be considered as nothing more than a potential tie-breaker by qualified retirement plan fiduciaries. As the DOL has directly acknowledged, ESG factors can be used in much more sophisticated and productive ways. (For its part, ACCF agrees theoretically with this possibility in one part of its criticism, accusing New York City of failing to live up the real possibilities of modern ESG investing.)

Many investing experts, including David Richardson, executive director, global head of marketing and client service at Impax Asset Management, have told PLANSPONSOR the association between ESG and negative stock screens is unfair and no longer accurate.

“Frankly that outlook is completely outdated,” Richardson says. As the name suggests, Richardson’s firm focuses on ESG investing portfolios and, as he puts it, “delivering superior performance by taking ESG factors seriously.”

The work involves much more than negative stock screens, he notes, and includes deep analysis of how specific companies and sectors use resources and process waste—as well as how they stand to gain or lose in the long-term from carbon pollution, recourse scarcity and climate change. In this way, ESG portfolios are built not to make an ethical stance, but to take advantage of the superior growth demonstrated by companies that do business in an ethical and environmentally sustainable way. And so it must be said, when presented honestly, few would argue that considering ESG factors is an outright bad idea when building investment portfolios with the very long-term time horizons faced by public pensions.

“Put simply, today’s ESG is a sophisticated and potentially very compelling investing principle going far beyond stock screening,” Richardson adds. “It’s not just Impax saying this. There are a variety of United Nations reports circulating that argue the same thing, urging all of us to start taking ESG seriously as a means to protect our finical futures.”

This line of argument will have to be articulated more clearly as the city—and other public pension funds across the U.S.—defend their decisions to leverage ESG, both in court and in the public consciousness. Also relevant is that New York City officials have separately filed a lawsuit against the “five largest investor-owned fossil fuel companies as measured by their contributions to global warming.” The city will be “seeking damages from BP, Chevron, ConocoPhillips, Exxon Mobil, and Royal Dutch Shell for the billions of dollars the city will spend to protect New Yorkers from the effects of climate change.” This includes damages to pay for harms already seen and damages that are necessary to address harm expected to happen over the course of this century.

With such a challenge, the pension officials are clearly trying to demonstrate the material nature of ESG factors on financial performance in the short- as well as long-term. 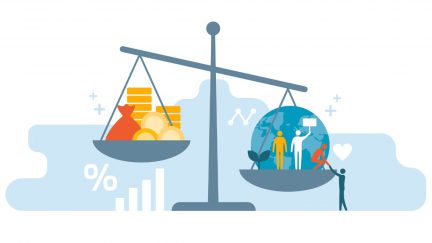 Four new appointees make a total of seven, charged with advising the PBGC on investments and other decisions.
SPONSORED MESSAGE — SCROLL FOR MORE CONTENT

« A Retirement Draw Down Strategy Starts With Education