“One of the benefits of Defined Outcome ETFs is that increased market volatility typically contributes positively to upside caps, providing investors with greater potential upside participation over the next one-year outcome period,” says Bruce Bond, CEO of Innovator ETFs.

Anticipated return profiles for the Innovator S&P 500, Nasdaq 100, Russell 2000, MSCI EAFE and MSCI EM April Series of Buffer ETFs, as of Monday are:

The April Series of Innovator S&P 500 Buffer ETFs (BAPR, PAPR, UAPR) currently has a remaining outcome period of just over one week, with known upside potential and downside buffers through month end. Investors who purchase prior to the rebalance on April 1 will be fully invested for the next outcome period, obtaining new upside caps and downside buffers on the first of the month, for the year ahead. For additional information, visit the Innovator Buffer ETF Pricing Tool.

Innovator Defined Outcome ETFs seek to provide a defined exposure to a broad market index (such as the S&P 500, Nasdaq 100, Russell 2000, MSCI EAFE and MSCI Emerging Markets) where the downside buffer level, upside growth potential to a cap, and outcome period are all known prior to investing. The ETFs reset annually and can be held indefinitely.

Vanguard will merge its Vanguard Capital Value Fund into the Vanguard Windsor Fund.

Following the merger, which is expected to be completed in mid-2020, the combined fund will retain the Windsor Fund name and continue to focus on large- and mid-capitalization value stocks.

The combined fund will continue to be managed by Wellington Management Co. LLP (approximately 70% of assets) and Pzena Investment Management LLC (approximately 30% of assets). David Palmer, CFA, manages Wellington Management’s portion of the Windsor Fund and is currently the sole portfolio manager of the Capital Value Fund. The Pzena team, along with Palmer, will oversee the combined fund.

“We apply a rigorous and comprehensive evaluation process to the oversight of our funds and advisers to ensure we are offering sound, enduring solutions that meet the long-term needs of our clients,” says Matt Brancato, head of Vanguard’s Portfolio Review Department. “We believe this merger will benefit Capital Value Fund shareholders by providing them with exposure to the two outstanding investment advisers managing the Windsor Fund and will benefit the combined fund through improved economies of scale.”

The expense ratios of the Windsor Fund—0.3% for Investor Shares and 0.2% for Admiral Shares—are not expected to change as a result of the merger. Following the merger, shareholders who are eligible for Admiral Shares may request a self-directed conversion at any time. Those who qualify for Investor Shares will experience an increase of one basis point.

IHS Markit will be postponing a majority of its rebalancing actions on impacted iBoxx indices from March 31 to April 30.

The company published an announcement about potential iBoxx rebalancing delays on its website on March 16, informing users that the company was considering the impact of index composition changes and would seek market feedback as appropriate. On March 17, IHS Markit published a consultation on its website on potential changes to the iBoxx rebalancing schedule, which concluded on March 19.

Updated rebalancing files were published to iBoxx index customers on Wednesday. A detailed list of headline iBoxx indices and the corresponding rebalancing dates can be found here. Headline indices affected by the rebalancing delay can find a description of the different rebalancing actions and their implementation dates below: 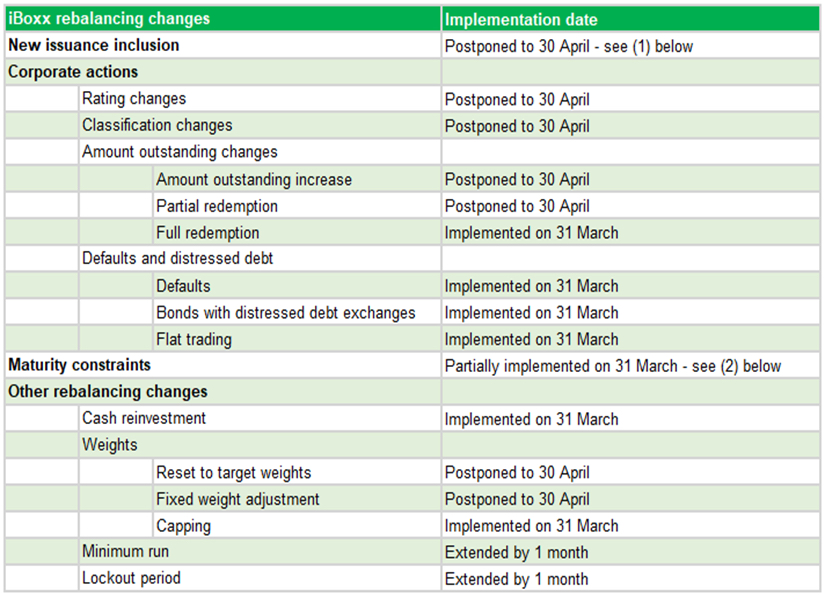 « Lawsuit Accuses Nationwide of Trying to Profit From 401(k) Investment