“Public school employees in the United States face more complexity than other workers when planning for a financially secure retirement,” AIG says in a survey report.

The survey of 500 K-12 employees sponsored by AIG and fielded by Greenwald Research found less than half (43%) of respondents say they understand the difference between their pension and voluntary retirement plan very or extremely well.

“Understanding the various components of what makes up K-12 employee retirement benefits is confusing, and our survey brings home those issues,” says Eric Levy, executive vice president with AIG Retirement Services. “The plan sponsor is the school district, but the structure of the market has been one where the district is not a fiduciary and there is not one single vendor to rely on for education and administration.”

Brodie Wood, senior vice president, national practice leader, health care and education at Voya, notes that the traditional model for K-12 defined contribution (DC) plans might contribute to a lack of clear benefits communication. K-12 DC plans are not governed by the Employee Retirement Income Security Act (ERISA), and many school districts don’t take as much responsibility for the plans as sponsors of ERISA-governed plans do. Employees have typically spoken one-on-one with multiple vendors and set up their own accounts—which are often annuity contracts for 403(b) plans—themselves. Traditionally, the district has only facilitated pay deferrals to vendors of these contracts.

The AIG survey report notes that many state and local government employees are not eligible for Social Security benefits, including approximately 40% of public school teachers. Although these employees are required to be covered by a sufficient pension plan, recent research from the Center for Retirement Research (CRR) at Boston College indicates that these standards may not provide the same lifetime benefits as Social Security.

The K-12 market has different plan types and different choices within some plan types, Levy notes. Many public school employees have a DB plan and a 403(b) plan, and employees might also be offered a 457(b) plan. “Participants are confused about why there are so many plans; some think the DB plan will take care of their retirement income needs,” he says.

Plan sponsors have an opportunity to educate employees not only about how the different plan types work but also about the implications of less generous pensions or of not getting a pension, and how a DC plan can help, Levy says. “We are advocates of individuals taking responsibility for their own savings and not just relying on DB plans or Social Security. That’s where DC plans come in,” he says.

“Those who participate in a DC plan recognize that the pension or Social Security is not going to get them to the retirement income they want or need and, in order to feel secure, they need to save on their own in a DC plan,” Levy says. “Non-participants feeling less on track reiterates the need for employees to understand their retirement benefits better.”

Levy says advisers and vendors can get information about employees’ DB plans and do financial planning with participants to show how adding DC plan savings and other assets will improve retirement outcomes.

Employees need to understand what their pension benefit provides to understand how a DC plan can supplement their needs, Wood notes. “If there are advisers who talk to employees, it should be part of their role to educate employees about the pension benefit and, within that context, talk to them about how they can use DC plans to get to their goals,” he says.

Wood says plan providers can also make tools available to help employees see if they are on track for a secure retirement. “We have a pension algorithm for each state and will pull in estimates of their pension benefits to help employees set goals,” he says. In addition, since many K-12 DC plans have multiple vendors, he says Voya’s My Retirement Overview tool allows employees to input their own data from various plans or providers.

The pandemic has also prompted a shift to a mix of in-person and virtual advice. Having more digital resources has been critical, he says.

Wood says it is important to use multiple communication and education touchpoints. “School districts can offer information when an employee is hired, but they should also make retirement part of annual enrollment meetings and materials,” he says.

Wood adds that DC plans are more important than ever to school district employees, as many states have adjusted pension benefits and a few have moved to only offering DC plans to new hires. He says teachers tend to be more conservative than other people with their money, so getting them to contribute to DC plans—or contribute more to the plans—can be challenging.

Simplification can also help make things easier for employees, says Wood. He says some states have taken on the offering of 403(b)s and 457(b)s in addition to the pension plans. “Some states have figured out they could get better costs and leverage state resources,” he says.

Four in 10 respondents to the AIG survey say they are overwhelmed by the number of plan vendors available to them, and only 43% of respondents agree that it is easy to navigate their plan choices.

Some states have pared down the number of providers, or even gone down to one provider for DC plans, and consolidation continues, Wood says. “One provider allows for one source of communications and standardized communications,” he adds.

Levy says school districts should take a more active approach to DC plans to either limit vendors or go to a single vendor. He notes that some have already done this.

“The aim is for employees to have a single point of contact and for school districts to be able to manage and control access to campuses,” he says. “With fewer vendors or one vendor, school districts will be able to make sure the message of the value of retirement benefits is made clear to employees. Districts and providers can come together more effectively.”

Wood points to shifts to allow more automatic enrollment in K-12 plans and the use of target-date funds (TDFs) as moves that are helping simplify decisions for employees.

Levy reiterates that there is a real opportunity in the K-12 market segment to bring clearer education and communication to employees.

“Whether in-person or virtually, school districts still want providers to engage with employees,” Levy says. “We’re focused on how to drive that engagement and continue to communicate and educate to get more K-12 employees enrolled in DC plans.” 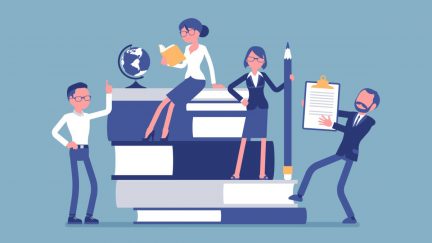