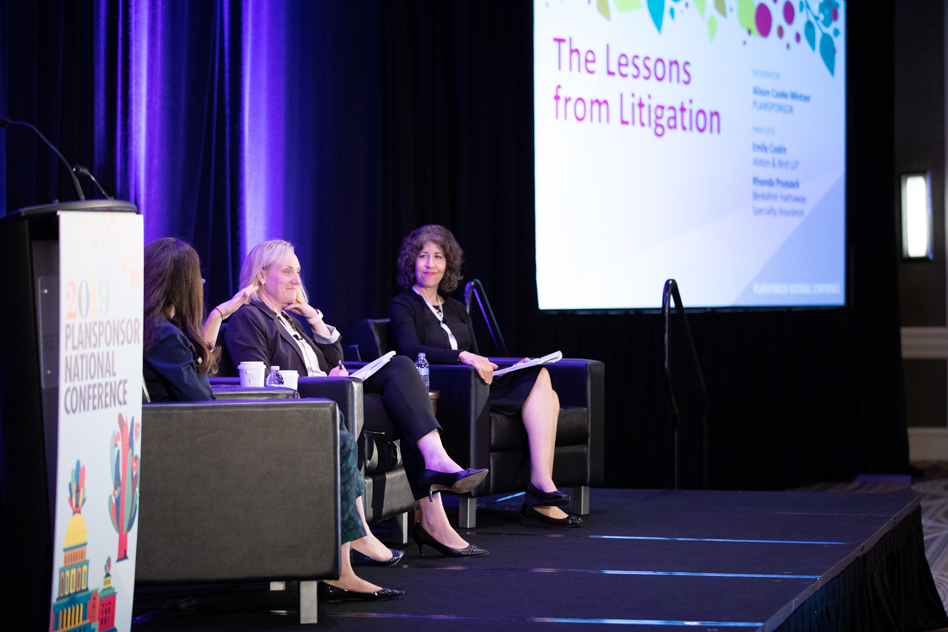 One of the topics most applicable in Employee Retirement Income Security Act (ERISA) litigation for small through large plan sponsors is fees, Emily Costin, partner with Alston & Bird, LLP, told attendees at the 2019 PLANSPONSOR National Conference.

She said the first wave, starting in 2005, related to disclosure and whether participants understood the fees they were paying for plan investments. This led to regulations about fee disclosures. “Now that [defined contribution (DC) plan] participants have disclosures, they can see what they are paying and that fees may be higher than what they expected,” Costin said.

Some excessive fee lawsuits claim that recordkeeper fees are too high or have ratcheted up with no increase in services (asset-based fees), Costin said. And, there are claims that the plan sponsor has failed to monitor or renegotiate fees or issue a request for proposals (RFP) to benchmark fees or see if another provider can offer lower fees.

Costin added that the retirement plan industry is starting to see additional types of excessive recordkeeping fee claims. One type alleges that the recordkeeper is looking to make more money, either by providing one service at a negotiated fee but getting more money by serving plan sponsors in another way or by using participant data to cross-sell services. In addition, lawsuits have been filed about hidden fees. For example, Costin says, there have been lawsuits related to fees for financial wellness services questioning who is paying for the service and what are participants getting from the service.

The good news is most excessive fee lawsuits never make it very far, Costin said. The key is what plaintiffs have to allege to survive a motion to dismiss. She said the standard to get past a motion to dismiss is emerging and differs by jurisdiction, but courts are deciding that plaintiffs need to allege something more than just plans are not using the cheapest share class or investment option, yet courts do recognize that plaintiffs don’t have information such as committee meeting notes.

“No court has said plan sponsors have to pick the lowest-cost funds; other considerations should come into play. Just claiming investments performed poorly on hindsight holds fiduciaries to a standard that is impossible, so plaintiffs have to also claim something else was done wrong,” Costin said. “Just claiming that one fund with a different investment strategy performed better is not enough. Just claiming fees are expensive or that the plan hasn’t been put out to bid for couple years is not enough.”

Some cases have been dismissed, but the bad news is that if a case survives a motion to dismiss, that’s when it gets expensive, and many plan sponsors will choose to settle. “Settlement tends to happen early, but is it not a sign of fault on the part of the plan sponsor. Some don’t want to incur the cost of discovery, some may find in discovery what the other side has so will settle right before trial and some are concerned about reputational risk from the lawsuit,” Costin said.

Rhonda Prussack, senior vice president and head of fiduciary and employment practices liability at Berkshire Hathaway Specialty Insurance, said very small plans less likely to be targets since lawsuits are expensive for attorneys and there won’t be a big payoff, but litigation is targeting smaller plans more than in the past. “Usually plans with a couple hundred million or more are targets,” she said.

As for settlements, according to Prussack, “Especially investment providers sued for using proprietary funds want to settle early so the company’s name is not drug through mud.”

While excessive fee suits are growing in number, Prussack noted that more than 200 ERISA stock drop lawsuits were filed before the Supreme Court made its decision in Fifth Third v. Dudenhoeffer in 2014. Since then, it has been harder for participants to bring claims. But, she suggested these types of cases may be coming back, as the Supreme Court just took on a case regarding company stock in IBM’s DC plan.

Costin suggested that for plans that have company stock as an investment, they need to hire an independent fiduciary to make decisions. “In the Jander v. IBM case, the people on the committee also happened to be company insiders, so even if you’re not going to hire an independent fiduciary, make sure you don’t use people at a higher level with insider information,” she told conference attendees.

She also noted that one of fiduciaries’ duties is to diversify, so it would be helpful to have a cap on how much participants can invest in employer stock.

Costin warned, “Don’t think you can say, ‘If I do these things, I will never be sued.’ Anyone is a target. Plan sponsors should follow best practices to put them in the best possible position where, hopefully, they won’t get sued, but if they do, they could defend themselves.”

She added that there is no law, regulation or Department of Labor (DOL) guidance for how to avoid a lawsuit’ fulfilling duties of prudence. To monitor is really a facts and circumstances test. “We don’t want a fiduciary who gets sued to look clueless. We want them to say, ‘I know I’m a fiduciary. I know my responsibilities. I have a proper expert for things for which I am not an expert. I knew about this decision, and the decision was documented.’”

What does fiduciary liability insurance do?

Prussack told conference attendees that fiduciary liability insurance has been around since ERISA was passed, and at its core, it was designed to protect fiduciaries from personal liability imposed on them by ERISA for breaches of fiduciary duty even if inadvertent or unknown. For example, if plan fiduciaries get sued, a fiduciary liability policy will initially start advancing payment for defense bills. If the lawsuit is settled by plan fiduciaries, the insurer will contribute some, and sometimes all, of the settlement amount.

She said that litigation costs can erode the limits of fiduciary liability insurance, and insurers are paying more in settlements now than in defense costs.

According to Prussack, when determining whether to insure a plan sponsor and its fiduciaries, insurance underwriters put themselves in the shoes of plaintiffs’ lawyers and seek out the types of behavior they are looking for. “For example, whether recordkeeping fees are based on plan assets or is a flat fee; whether the plan has robust processes; whether plan fiduciaries know their role, meet routinely, benchmark fees and have a process for getting rid of underperforming funds; and whether they do an RFP every three to five years to make sure the plan is using the best provider and getting the best value,” she explained.

One of most difficult questions to answer is how much insurance to get. According to Prussack, there used to be a rule of thumb to get coverage of at least 10% of plan assets, but now the amount depends on many factors. One thing she suggests is that employee stock ownership plan (ESOP)-owned companies; companies undergoing transactions such as mergers, layoffs or pension risk transfer (PRT); and larger firms should get the most insurance they can afford.

The allegations in the case are filed on behalf of the same plaintiffs who have already sued their employer, Molina...

In their motions to dismiss the case, the plan fiduciaries unsuccessfully argued that the plaintiffs invested in only some of...