In 1958, British artist Gerald Holtom drew a circle with three lines inside, intending the design to be a symbol for the Direct Action Committee Against Nuclear War (DAC).

The design incorporates a circle with the lines within it representing the simplified positions of two semaphore letters (the system of using flags to send information great distances, such as from ship to ship). The letters “N” and “D” were used to represent “nuclear disarmament.” (The “N” is formed by a person holding a flag in each hand and then pointing them toward the ground at a 45 degree angle. The “D” is formed by holding one flag straight down and one straight up.) 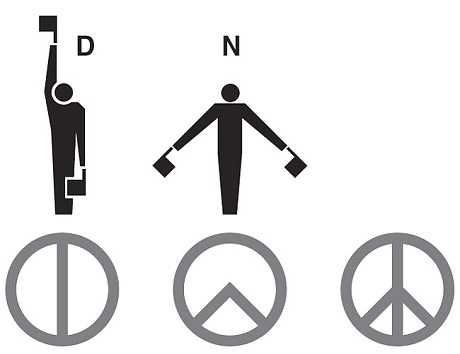 In Britain, the symbol became the emblem for the Campaign for Nuclear Disarmament (CND). In 1960, the symbol migrated to the United States and began to be used as a symbol for the peace movement.

« A Vision for National Retirement Reform