Created by Rudolph Dirks, it first ran on December 12, 1897, in the Sunday supplemental for The New York Journal. The comic strip was about the adventures of rebellious twin brothers Hans and Fritz.

Reportedly, it proved so popular it sparked an early 20th century bidding war between newspaper barons William Randolph Hearst and Joseph Pulitzer. Pulitzer and Dirks kept Hans and Fritz for The New York World, while Hearst kept the strip’s title. 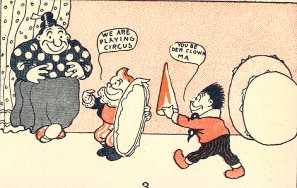