Esther Allen Howland of Worcester, Massachusetts, is said to have received her first English Valentine after graduating from Mount Holyoke College in 1847. With the idea to make similar cards, she imported paper lace and floral decorations from England and began taking orders for Valentines. She issued her first advertisement in The Daily Spy newspaper on February 5, 1850.

The assembly line operation that began in her home led to a business grossing $100,000 annually. Howland retired in 1881 and sold her business to the George C. Whitney Company. 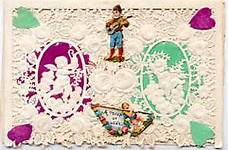