The last time I wrote about them, medium- and long-term interest rates were about 50 basis points higher than they are now. That was two months ago.

In a corporate defined benefit (DB) plan, this increase in cost is generally (and with a lot of smoothing thrown in) made explicit under generally accepted accounting principles (GAAP) disclosure rules. How is it reflected in a defined contribution (DC) plan?

DB plan sponsors carry three major types of risk—interest rate, asset, and mortality. In a DC plan all three of these risks are transferred to the participant. The significance of this transfer is, with respect to the latter two (asset and mortality (aka “longevity”) risk), relatively intuitive. We all generally understand that in a DC plan the participant is on the hook for asset performance and should somehow hedge against “living too long.”

But what happens—in the shift from a DB to a DC retirement savings model—to interest rate risk? The answer to that question is interesting and a little confusing, in that it points in many different directions at once.

The multiple functions of interest rates

Second, interest rates are a proxy for certainty, in two dimensions. For a corporate DB plan, e.g., they represent a way of (more or less) definitely calculating the value of the DB liability on the firm’s books. Hence their utility as the most transparent version of the plan’s cost to the firm.

But they also are the market return available to an individual who prefers certainty to risk.

Third, changes in rates (holding other variables constant) have a direct effect on equity valuations, more or less on the same principle by which they affect DB plan liability valuations. For instance, a decrease in interest rates will result in an increase in the value of a firm’s stock and (more generally) in the value of the S&P 500.

Fourth, they (fundamentally) reflect the relative supply of lenders/demand for credit and as such are an index of the market’s view-of-the-future. If it’s not clear: very low interest rates reflect a belief that there won’t be a lot of growth in the future.

Fifth, to some extent—I would argue only to a very limited extent and generally only with respect to short-term rates—they reflect central banking (in the U.S., the Federal Reserve Bank) monetary policy. That is, sometimes changes in some market interest rates may have more to do with what the Fed is doing than with the first four factors I have noted.

So, roughly and with a number of qualifications, a drop in interest rates is going to be associated with a write-up of assets (stock and bonds) and liabilities on the books, and a lowering of future earnings expectations (including returns to stocks) and liability growth.

There is a good argument that a DC plan participant is in a better position to take more risk than a DB plan sponsor is—because the participant does not have to publish financial statements that are constantly updated for losses related to, e.g., decreases in the plan valuation rate or losses on the plan’s asset portfolio, or both. Many participants have available to them “Plan Bs”—such as working longer or living on less—that are not available to a corporate DB sponsor. In other words, a DC participant may have a more elastic preference for risk than a DB sponsor and may be able to move further to the right on the efficient investment frontier as the returns to certainty (that is, interest rates) go down.

But—and this is probably the greatest oversimplification in this article—if interest rates go down and stay down, returns on equities will at some point follow.

Moreover, as an individual/participant/retiree ages, his preference for risk shifts to the left—that is, he is less risk-tolerant. If, as many are advocating, the participant—say, when he retires—annuitizes his DC plan account, then at that point he will have to explicitly reckon with the cost of these lower interest rates.

All of which is a really long way of saying that if the drop in interest rates in the last two months increases the cost of a DB plan sponsor to provide a 40-year-old participant with $1 of retirement income by 17%, it will in the long run drive up the cost of that 40-year-old participant to provide herself with $1 of retirement income from her DC plan account by a similar amount.

The question raised by the July-August declines

As I discussed in my July column, much of this is the result of a worldwide decline in the rate of population increase. Fewer people = less future.

The question which, in one way or another, we are all asking, is at what point will these trends stabilize?

The answer from the interest rate markets is: not yet.

Below is a chart of Moody’s Aa corporate bond rates from their highs in the early 1980s to date. 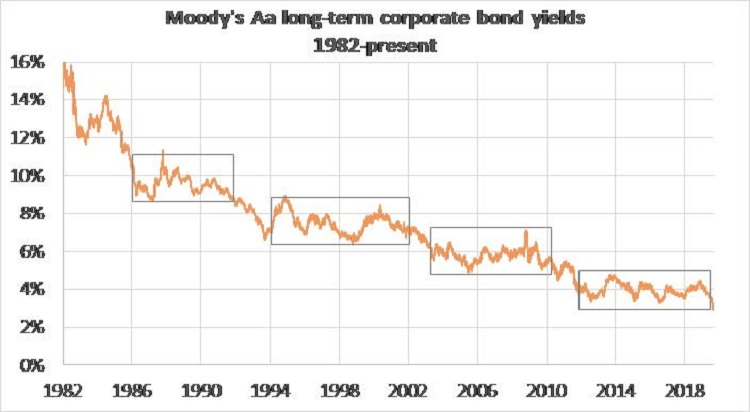 It seems to me that, looking at this chart, the best Darwinian survival strategy is to think about these rates moving within a window that adjusts over time. So far, that adjustment has been in only one direction: down. If, at any point during the last 35 years, you were assuming that current rates would instead adjust to a (higher) retrospective mean, you would have been wrong.

For the last seven or so years, these rates have been moving inside a 3% to 5% window. 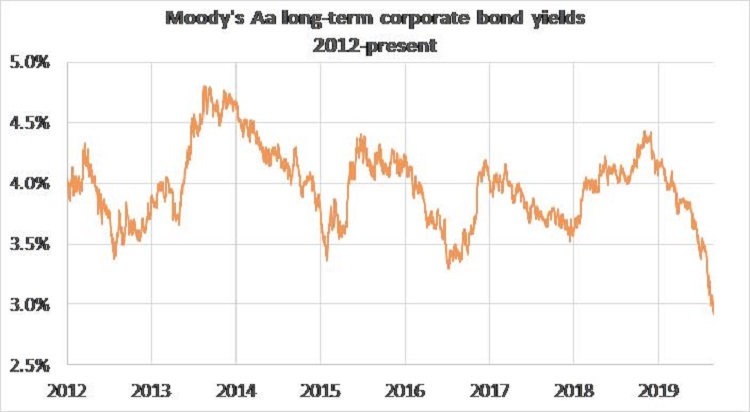 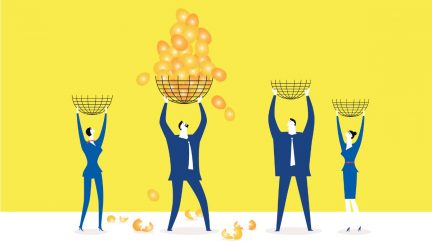 Have Congressional Retirement Reforms Only Boosted Savings for the Wealthy?

Legislative changes that aimed to increase retirement assets for moderate- and low-income individuals have disproportionally benefited high-income earners, a law...

The firm has agreed to pay $7 million and offer a brokerage window providing participants with access to nonproprietary funds.
SPONSORED MESSAGE — SCROLL FOR MORE CONTENT

« TRIVIAL PURSUITS: From Where Did the Term ‘Cooties’ Come?