Art by J. CardielloPay-as-you-go (PAYGO) retirement systems were, for millennia, the way that retirement was financed. Admittedly, “retirement” before the second half of the 20th Century was less about sitting on a beach and more about disability and the inability—because of “old age”—of individuals to support themselves by working. And the “financing” of retirement was not really formalized until the adoption in Europe and then in the United States of systems of social insurance.

But before those formal, government-sponsored PAYGO retirement systems were put in place, the most obvious way people dealt with their “retirement” (a.k.a. disability) was to move in with their children (or other relatives). Which is just an informal version of PAYGO—the generation that is working pays, out of pocket, to support the generation that can no longer work.

Thus, what defines a PAYGO system is that individuals who are currently working take part of their current earnings and transfer it to those who can’t. As such, it’s a transfer between generations. It is not (and this is a really important point) a transfer across time. As a result, in a PAYGO system, you don’t need savings. What you need is a working generation that is productive enough that it can both support itself and its parents.

For the period from (say) 1850 to 2000, a number of demographic factors made PAYGO the ideal way to finance retirement. First, we could generally count on population growth to provide an increasing number of “current workers.” This was especially true in the 20th century (the heyday of government PAYGO retirement systems), when world population grew at an unprecedented rate. (In the U.S., increasing real wages also helped this process enormously.) Second, when most of these systems were put in place, at the end of the 19th and the beginning of the 20th centuries, life expectancy after retirement was relatively short. Third, at that time, child-raising costs (a dependency cost which also must be born by the working generation) were low (at least relative to what they are today).

PAYGO’s one great virtue is that it’s really simple to operate. You don’t have to save or invest anything. One generation simply writes checks to the other.

But it has two great flaws. First, it presents an adequacy problem. If the demographic algebra changes—if, for instance, the working generation is smaller than the retired generation—the system won’t work.

Moreover, because PAYGO depends entirely on an implicit compact between generations, the system will be stressed and may fail if the working generation simply finds the PAYGO burden too onerous—because, e.g., the period of retirement has increased (because of longer lifespans) or the burden of child-raising has increased. Or, even, the rate of population or wage increase is lower than expected.

Second, it presents a fairness problem. If everyone has the same number of children (or at least pays the child-raising costs of the same number of children), then the PAYGO burden is evenly distributed. But, obviously, that doesn’t happen. Consider that, in the United States, the “child-free-ness” rate has grown from one in 10 (in 1976) to one in five (in 2007). Who’s paying for the retirement of these “child-free” individuals? Someone else’s children.

NEXT: Population growth made PAYGO work

And that is what we had—uniquely it turns out—in the 20th century. But not anymore.

At this point, with the possible exception of Ireland, the only first world countries adequately reproducing their populations (generating a population reproduction rate at or above 2.0) are doing so by, in effect, importing workers from the third world. At some social cost.

And the data shows that even third world population growth is slowing. 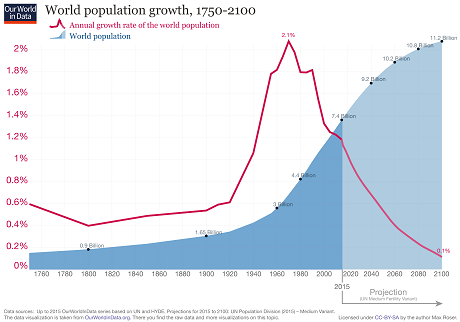 And remember, it’s growth in working population (and wages) that makes PAYGO systems cheap and therefore viable. Merely reproducing the current population probably isn’t enough, especially when the cost of dependency continues to increase (as the cost of child-raising and the length of retirement increase).

The housing boom-and-bust is a good analogy. Housing was a fool-proof investment so long as housing prices increased at a rate of 5% to 6% per year. But when the increase dropped to 2% to 3% the whole thing collapsed.

NEXT: Things that can’t go on forever don’t

As Herb Stein once famously said, things that can’t go on forever don’t. We’re facing a demographics-driven crisis that is going to kill PAYGO. At some point in the relatively near future—20 or 50 years?—some working generation is going to say “enough.”

How much does that matter? Exactly what are the PAYGO systems operating in the US? The obvious, explicit PAYGO retirement systems are Social Security and Medicare. But there are other, implicit PAYGO systems. All the (significantly) underfunded state retirement systems are operating, in effect, on a semi-PAYGO basis (to the extent of the underfunding). As are the significantly underfunded multiemployer plans.

People throw around a lot of numbers to quantify this obligation, and there’s a politics to all that. But there’s no doubt that this unfunded PAYGO liability is in the 10s of trillions of dollars.

More to the point: current workers, increasingly, are not going to be able to sustain it.

What is Plan B?

The problem with all this—a problem which almost no one will talk about—is that once a PAYGO system collapses, you are faced with a worst case scenario: assuming no benefit cuts, current workers will have to both (1) pay for the previous generation’s retirement under the (dying) PAYGO system and (2) fund their own retirement. They’ll have to pay for two generations’ retirement.

The other option is to cut benefits to current retirees. Who not only see their benefits as an “entitlement,” but who also are often not in a position to go back to work to supplement their (reduced) retirement income.

Either of these alternatives presents an incredibly painful prospect. Especially for a politician.

NEXT: But we’re lucky

Fortunately, in the United States, the government-mediated PAYGO systems are small relative to the rest of the first world. And we have a robust, mostly funded corporate retirement system.

We do, however, have significant areas of distress. While some states’ retirement systems are well-funded, some are heading for the cliff. The multiemployer system is in trouble. And at some point we’re going to have to face up to the Medicare funding problem.

We need to think—hopefully both calmly and rationally and with consideration for all interests and points of view—about how to handle those areas of distress. Right now, for instance, younger workers in significantly underfunded multiemployer plans are paying a meaningful chunk of current pay just to fund the benefits of retirees. Is that how we want to solve that problem—to make current workers in the industries with “retirement distress” eat the cost or pay twice? Or—as Bernie Sanders has proposed—should we provide some sort of bailout at the national level?

You could ask the same question about states. Although, there, the problem is much bigger (and thus more expensive to solve). Bailing out irresponsible states really throws the incentives out of whack. And is probably politically unacceptable.

Finally, at some point, somebody is going to have to do something about Medicare.

Take another look at that chart. This time, demographics are not going to bail us out. We need to start talking seriously about a Plan B.

A Checklist for Retirement Plan Committees

The Ways and Means Committee chairman sets out goals for Social Security benefits, MEPs and automatic features in his list.
SPONSORED MESSAGE — SCROLL FOR MORE CONTENT

« SURVEY SAYS: What are your fears about taking vacation?