Although both employers and their employees see the value of guaranteed lifetime income options, differences appear among 401(k) and 403(b) providers when it comes to retirement plan design, according to a survey by TIAA.

The survey found 403(b) plan sponsors are more likely to see income replacement as the biggest influence on their plan decisions (46% vs. 30% of 401(k) plan sponsors) and to consider the retirement income replacement ratio (41% vs. 21%) and retirement readiness (37% vs. 19%) as key metrics of their plan’s success. 403(b) sponsors (82%) are also more likely than 401(k) sponsors (67%) to believe their participants are extremely/very interested in guaranteed lifetime income annuities.

Tim Walsh, senior managing director at TIAA, says, historically, not-for-profit and private higher education plan sponsors did not offer defined benefit (DB) plans, so they used annuities to provide retirement benefits to employees even before the Internal Revenue Code (IRC) was drafted in the 1950s to only allow annuities in 403(b) plans. “So, a lot of 403(b) plan sponsors have always used them and they tend to be more comfortable with them,” he says.

Eric Levy, executive vice president of AIG Retirement Services, says the bigger picture is about what plan sponsors and participants are trying to accomplish.

“It’s less about the vehicle. More plan sponsors and participants need to get comfortable with the creation of income,” he says. “The only way to get guaranteed income is to annuitize retirement benefits. The question then is will annuities be offered in-plan or out-of-plan.”

Levy says some people might have expected that when the Setting Every Community Up for Retirement Enhancement (SECURE) Act was passed, plan sponsors would suddenly start offering annuities in their plans. Instead, it heightened awareness and created a path for annuities to be integrated into plans. “We are now on a learning curve that will take some time for plan sponsors and consultants to engage with in order to solve the problem,” he says.

Levy says one reason 401(k) plan sponsors are not moving to adopt annuities is they recognize it’s not just about offering them, but also about educating participants. They are looking for education offerings as well. “If all they do is add an annuity option to the plan, it’s just another investment. To get people to use it, they need to understand how it solves the problem of creating income, what trade-offs there are and how to transition the vehicle into income,” he says.

He argues that some participants will annuitize their savings whether annuities are offered by their retirement plan or not.

“People buy annuities because they are concerned about longevity risk. So if it’s going to happen, doesn’t it make sense to offer participants institutionally priced annuities with lower fees?” Walsh queries. He says this is a key benefit of in-plan annuities; the TIAA CREF annuities are generally one-fourth to one-fifth the cost of retail annuities.

Walsh points out that 403(b) plan participants typically only annuitize part of their benefits. This is a key argument heard against using annuities in 401(k) plans—participants don’t want to lock up all their assets. 403(b) plan participants invest in annuities, but they can decide whether to annuitize their savings or not at retirement. “A diversified income strategy that includes partial annuitization, systematic withdrawals and Social Security benefits is the best combination for meeting daily expenses, emergency expenses and leaving a legacy in retirement,” Walsh says.

“Work is being done on annuity design to address the trade-off of liquidity,” Levy says. “The idea of money being locked up and losing it if the participant dies before payout has changed.”

Walsh says another key benefit of annuities, especially fixed-income annuities, is that they will give participants bond-like returns with less volatility. “Using them during the savings years as fixed-income investments is actually more efficient,” he says.

Plan sponsors and participants might not think of annuities as investments like they do mutual funds. Walsh says that’s because in the retail space, many people purchase options that are annuitized right away. But in-plan annuities are investments, he says.

Both TIAA and AIG are getting more questions from advisers than plan sponsors about what is available in the annuity market, according to Walsh and Levy.

“What we’ve seen is that since the SECURE Act was passed, plan consultants are asking these questions: Do you have to annuitize? What is the cost? Are they investments?” Walsh says. “We show them a fixed annuity side by side with a bond mutual fund. With the bond mutual fund, every month the value goes up or down, and when the participant terminates, changes jobs or retires, the participant can roll over assets or take them out. When a participant invests in an annuity, the value is guaranteed to go up, with the amount depending on interest rates. Bonds have volatility, but annuities give bond-like returns without volatility. When the participant terminates, changes jobs or retires, he can either take the money out of the annuity just like mutual funds or annuitize.”

Walsh says TIAA saw more interest in discussing annuities after the SECURE Act was passed, but that fizzled when the COVID-19 pandemic became a primary concern. Now, he says, that interest is picking up again.

“It’s going to take time,” he says. “I think in the same way that post-QDIA [qualified default investment alternative] regulations, TDFs [target-date funds] changed and evolved, the same will happen with annuities. It took five to 10 years for TDFs to grow to be the most common QDIA. Then, there’s been a move from proprietary to custom, to passive or CITs [collective investment trusts]. We’ll see the same product innovation with annuities—not only in-plan, but embedded in TDFs and managed accounts. The price will continue to come down and more consultants will take fiduciary responsibility for annuity offerings as they get comfortable with annuities.”

Levy also says there will be a significant evolution from providers to bring innovative products to the annuity market. “Recordkeepers, insurers, asset managers and the fintech [finance technology] community will need to come together to deliver guaranteed income for participants in an efficient way,” he says. “And they need to come together to educate plan sponsors and participants, as well as the advisers who are the touchpoints to plan sponsors.

“We view this as a very exciting time and see significant opportunity in the space,” Levy continues. “I think the industry is poised, combined with the recognition of lawmakers and regulators, to make retirement plans what they were meant to be—a retirement-income generating solution.” 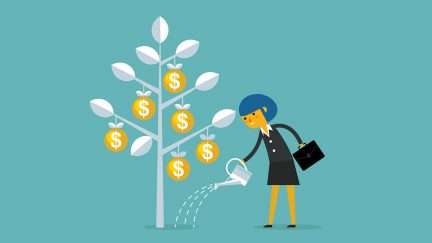