With the passage of the 2018 Farm Bill by President Donald Trump, hemp and cannabidiol, or CBD, companies can sponsor 401(k) plans for employees and take advantage of the related tax deductions.

Josh Horn, partner and co-chair of Fox Rothschild’s cannabis law practice in Philadelphia, explains that hemp that has tetrahydrocannabinol, or THC, with a 0.3% dry weight, and CBD, which is derived from hemp, were taken off the controlled substance list by the Farm Bill. The bill also allows hemp farmers to apply for crop insurance, and, according to Horn, makes banking and finance systems available to these businesses.

Michael Nepveux, an economist with the American Farm Bureau Federation, said in an article, “Uncertainty still exists about how and when regulations in general will be implemented and what those regulations will look like,” adding that regulators indicated it will likely not be until the 2020 planting season that definitive rules will be in place.

Matthew Able, senior partner at law firm Cannabis Counsel, PLC, and executive director of Michigan NORMAL [National Organization for the Reform of Marijuana Laws], says he had a couple of clients call about the new law. Clients are usually individuals or smaller companies, and they are not yet thinking about offering a 401(k). “If they make a lot of money this year, there may be a lot more action on that next year,” he says.

When they do think about establishing a 401(k), hemp and CBD companies may face obstacles. According to a blog post from Jewell Lim Esposito, an attorney with FisherBroyles LLP in Washington, D.C., “The real obstacle to implementing 401(k) plans for otherwise legal marijuana producers are the industry retirement plan providers who are nervous and jittery about dealing with ‘traffickers.’ In fact, they’re more than nervous. They have dug in their heels, refusing to do business with cannabis companies technically engaged in trafficking under federal law.”

Add nervousness to the confusion over dealing with the tax code, the Employee Retirement Income Security Act (ERISA), and “single employer” concepts, she says. “Companies that produce proper hemp are legal under the federal Controlled Substances Act (CSA). Yet, if those hemp companies are treated as related, under common control, or as a single employer with the companies the produce cannabis (illegal under the same federal CSA), plan providers have difficulty reconciling the intersection of tax, ERISA, and cannabis rules to see how 401(k) plans can be provided to all of them,” Esposito explains.

Horn says, “In a nutshell, the federal government has historically taken a hands-off approach to medical marijuana and has indirectly not touched recreational use unless there is a crime like transporting over state lines. The Department of Justice has defunded prosecution efforts. It creates an interesting dichotomy between medical and recreational uses and the juxtaposition between federal and state laws.”

Even hemp companies not engaged with cannabis businesses will run into trouble because people don’t understand the difference between hemp and cannabis, so companies may not do business with them, Horn adds. He says there is a big learning curve.

Able says Cannabis Counsel did not have a problem finding a 401(k) plan provider; however, it had bank accounts closed twice, even though it’s just a law firm. He says branch employees are fine with handling the business, but when upper management sees the word “Cannabis” in the company name, they “freaked out.” The firm now goes by an assumed name.

Able says there is no recourse when providers refuse to do business with hemp, CBD or cannabis companies. “I don’t think the banks should have been able to close our account, but we have no recourse except to post a negative review on social media,” he says, adding that he and clients that have also had that happen can just chalk it up to “growing pains.”

When clients complain about it, Able tells them to contact their Congressperson; it’s a federal legislative issue. Fighting it is not successful in courts because the courts keep kicking it back to Congress.

He notes that companies can deal with paying their bills with cash, but they can’t use cash only when operating a 401(k) plan. “We will continue to have these issues as long as cannabis is a Schedule I controlled substance,” Able says. “The more trouble companies have, the better, because it will stimulate change. If everyone is fat and happy, there’s no reason to rock the boat.”

2018 New Frontier Data from the Hemp Business Journal shows the hemp industry is projected to grow to $1.3 billion by 2022, and CBD product sales are projected to increase to $430 million. For financial firms it’s a question of profits versus reputation.

Able believes it will be financial firms, not activists, that push cannabis off Schedule I because they want a piece of the pie. But, he warns that folks in the hemp/CBD/cannabis industry should be careful what they wish for. “The fact that cannabis is a Schedule I controlled substance and Section 280E of the Internal Revenue Code [which forbids businesses from deducting otherwise ordinary business expenses from gross income associated with the ‘trafficking’ of Schedule I or II substances, as defined by the Controlled Substances Act] are keeping big business at bay. Once these issues are solved, we may see a big financial services firm getting into the business, running small providers out of it.” 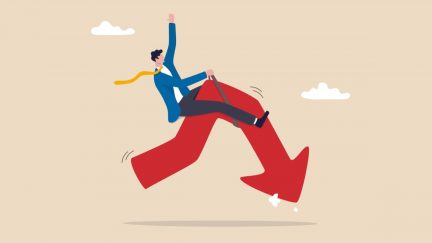 Workers kept their employer-sponsored retirement plans on track in Q3 even as they saw 21% or higher declines in their...
SPONSORED MESSAGE — SCROLL FOR MORE CONTENT

« What to Look for When Monitoring Retirement Plan Advisers